The Truman Show, a movie full of deeper, symbolic meaning of the “True Man, Perceived,” as its title suggests. This first-time joint effort by me (Jesse) and Gabe (author of blog Upon the Face of Waters) is an analysis intended to uncover whatever hidden truth we suspect is encoded within the script of this film. It’s our hope that this two-perspective approach will bring some fresh discoveries to this journey.

As we began with this, we quickly realized that an entire book could probably be written on profound truth hidden within this film. So, perhaps this might be part 1 of more to come…

I try to imagine what is symbolized here. Truman in his Ford Taurus.

Ford means “a passage or a shallow crossing” (from German root etymology). Taurus is the name of a bull, a frequently used symbol for a ‘strong force.’ The taurus (bull) refers to the torus (field). The torus is the duality we’re currently experiencing (see link). It is the left and the right opposing forces dancing around each other and, eventually, working as one. It is the light and the dark, the black and the white doing what opposites do. Opposing, yet propelling. This is something I’m actively pondering on and have explored in other posts on this blog. Interestingly, there is a narrow passage (aka a ford) within the torus, which is at the center (center, centaur, cenTAURus). In a symbolic way, “Truman in his Ford Taurus” might be code for “True Man crossing through the center of duality.” Referencing a previous post, the centaur pierces the bull …and crossing through/over is symbolized by the cross.

The Dog | Two Bulls and a Coward | The Twins and Truman

This pivotal scene where the Sirius lamp falls from the sky to trigger the stirrings of awakening in Truman deserves a deeper look. Sirius the Dog Star is known to be a source of “ET” or divine intelligence for channels and mediums. It’s a source of light. It’s also a twin star, there is Sirius A and Sirius B.

The next shot is between the two pillars – the twins:

We see alot of dogs and a lot of twins, in this movie and other coded and loaded films like it.

The twins are doggin’ Truman in this scene, as they shove him up against the poster: 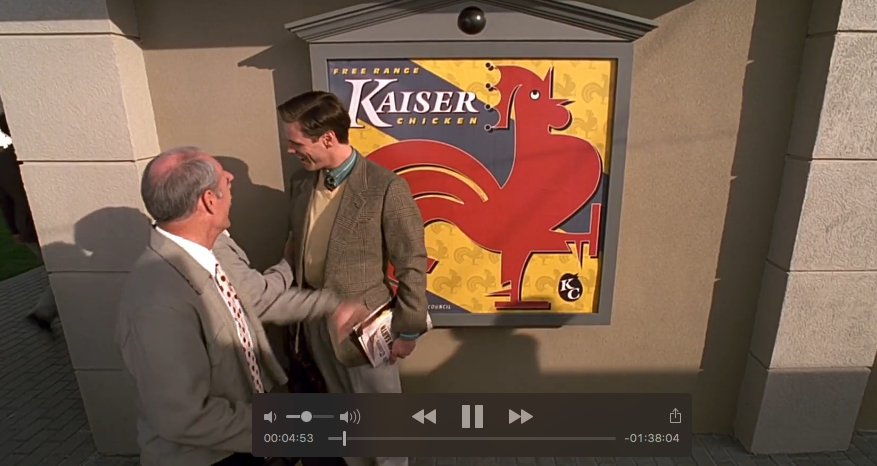 The chicken’s head looks like a sideways crown or corona, which we see during an eclipse of the twins sun and moon: 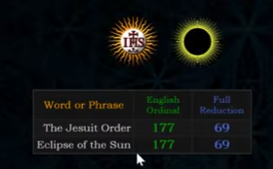 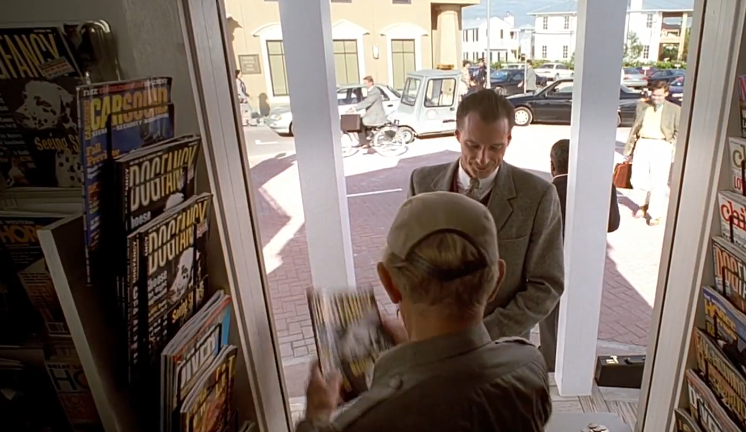 Dog lies. But dog is also jackal-headed Anubis, the “keen-scented Deity that could guide man through the darkness of incarnational night” (Kuhn). This is truth. So we have truth and lies, “dog fancy.” the two polarities of the bi-bull, the dual animal, the zoo-diac. Tales from the bible are told in parable. Truth must be unpacked from the false cover story (bull shit).

The two men, identical twins, represent the two bulls (forces). The left and the right opposing forces working in unison, keeping the COWard subdued by the BULL. The twins seem to exist solely as a distraction for Truman. Something is being communicated to the careful observer when the twins rather forcefully nudge Truman against the banner that reads “Free Range Kaiser Chicken.” This whole scene is accompanied by Mozart’s Piano Sonata No. 11 “Alla Turca,” which means Turkish March (I could go on about this poultry theme but perhaps we’ll save that for another post).

What does “Free Range Kaiser Chicken” actually mean here? Observe the banner closely: a chicken with a crown, marching (as in military).

Free = Not in bondage, acting of own will

Kaiser = King of Kings (etymology > German for Emperor). King has a crown, which connects with corona, eclipse, sun, son.

Chicken = Poultry = Poltroon = Coward. In a way of speaking, to be a chicken is to be a coward. The COWard is afraid of the BULLy.

In a sense, this seems to imply that the perpetuation of true man’s fears, keeping him in this state and pushing him through many trials is of benefit to some higher level power. Just as we raise chickens for a profit, so is true man being raised for a prophet.

As the story goes, Truman desires to know Sylvia, as it was love at first sight, but he never could get close to her. Instead, Meryl was scripted and pushed into his life, preventing Truman from pursuing Sylvia.

As I understand it, Sylvia represents a higher spirit/form outside of the constraints of Truman’s world. Sylvia suffers with him, as if in prison with him but apart. Throughout the movie, we learn that Sylvia is actively trying to contact Truman through various means in order to ‘wake’ him up to the reality of his world. She cares for him but also clearly desires to be with him.

Contrary-wise, Meryl represents surfaces and illusions. Her purpose is to dissuade Truman at every turn from acting on his suspicions and keep him running from his own shadow.

Sylvia is that splinter in Truman’s mind, causing him to know something is not right.

“Meryl” as ‘sea’ is interesting because both sea and Meryl are “gatekeeping” Truman from real life. 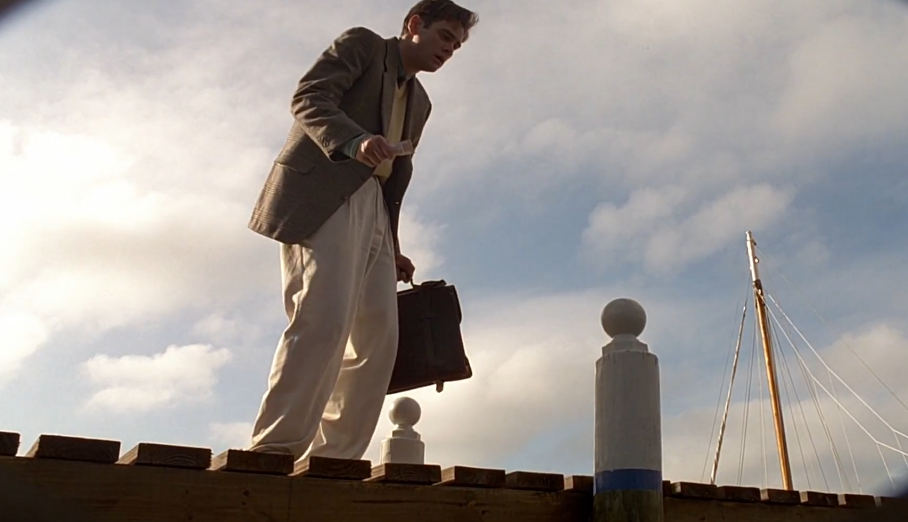 Truman is afraid of water, drowning and that keeps him in the fake reality. With water as incarnation, this whole studio city could be thought of as a pre-life sim, similar to that new pixar movie “Soul”

But, in a twist, Truman is played by a J.C., and Jim Carrey is likely one of these lifetime actors, he’s always acting, even off-set, and they made him all enlightened and woke, right? He walks around with a big beard saying deep things…

I don’t buy it…it’s a script. Part of the Jim Carrey Code: make him “woke.”So the joke is on us, the viewer, thinking we know a secret that Truman doesn’t know, that his reality is scripted, when in truth it’s a double blind, he knows exactly what’s going on in his pre-life sim, and off the stage he is still acting with a script, and the masses play “Truman,” being ignorant of that fact, that everyone on the news and TV are “lifetime crisis actors” basically. So who is the true man, after all? Jim Carrey JC as the Christ that doesn’t want to incarnate.

Wasn’t this is the original sin of Lucifer and his host of angels? The sin of the angelics prior to incarnation is a hesitancy or unwillingness to “fall.” Hence the idea of Lucifer and his hosts being booted out of Heaven. But this very well may apply to all of us, on some level. Kuhn writes about how Onan’s sin, which now applies to wasting the seed via masturbation, was a parable of this same hesitancy to fully copulate with matter (mundane earthly life). Maybe they were called The Watchers because they only wanted to watch from Heaven, but not partake themselves. We are all fallen angels because we fell into matter, we dived in the water (incarnated, the Cycle of Necessity), we got on that ferry boat.

One to Two, Two to One

The ‘one becomes two’ and ‘two becomes one’ themes, are prevalent throughout the film. In the bigger picture of life and death, it is thought that when one becomes two, it is actually death (though we perceive it as the start of new life here). But, truly as I now see it, one dies into two (to die, dice, to cut). Di- prefix to words implies ‘double.’ So, when one dies, one becomes two.

Chef’s Pal! It’s a dicer, grater, peeler all in one!

Example of one becoming two:

Trip to Wells Park, Harbor Island Ferry Terminal. The man in the booth asks “one way or return?” Truman stauntly replies with shock, as if deeply conflicted by the question, “return.” He hands a $1 bill in exchange for a 2-way ticket (ticket has a large ‘2’ printed on it). One becomes two, symbolically demonstrated.

At first watch, it seems like a bit of a ‘sick’ joke to send Truman on a trip to the dock, knowing full well he would not be able to face his fear. Truman walks through the revolving terminal gate, stops at the twin pillars, and returns through the same gate, saying “you go ahead, I’ll… I’ll be fine.” It seems revolving gate and his shuddering statement is of twofold significance. “Fine” has a few meanings… First, a fine (as a noun) is both a termination and a penalty… a death penalty in a sense. Similar to French “fin,” which means ‘end.’

Note, the revolving gate is important. There is also a revolving door at Truman’s workplace “Life and Casualty.”

Secondly, and perhaps more importantly, to be fine is to be refined. We are refined through trials as we pass through ‘between fire and water.’

Towards the end of the film there is another two to one reference. As Truman sets out to sea, the bartender shouts out “I bet two to one he doesn’t make it!”

Once Truman is ready to exit, he bows out (another reference to bowing out was when we was hanging over the bow of the boat) and crosses through.

Truman as the Son and The “Double Crossers”

The reason for Truman’s irrational fear of water was the fake planned death of his father at a young age: 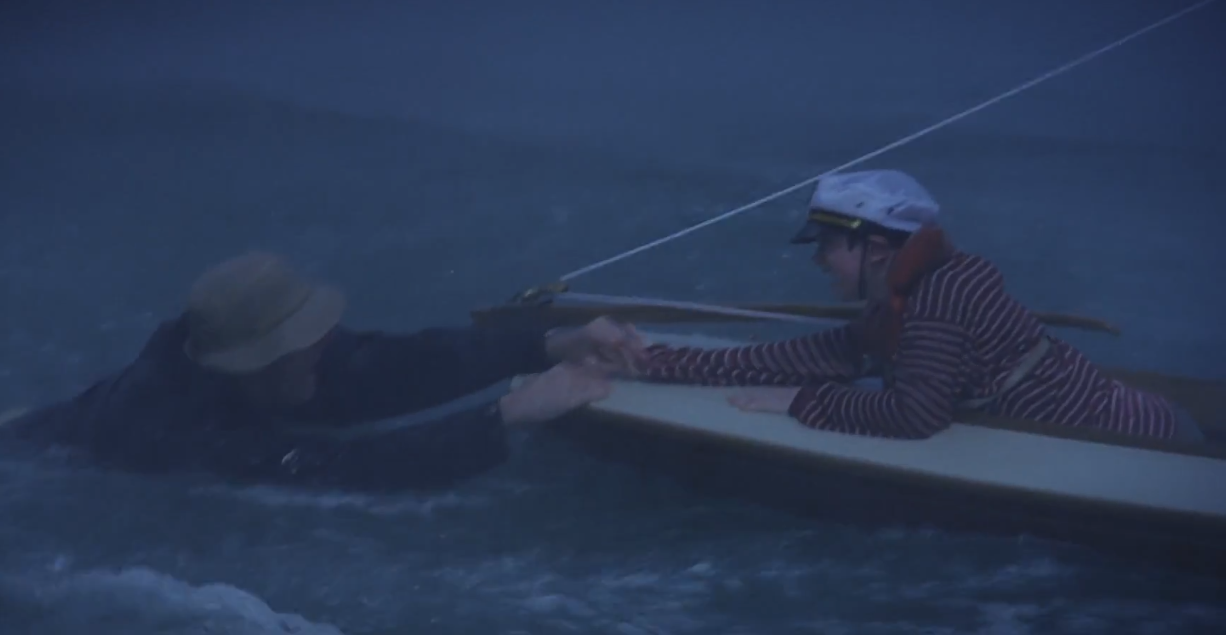 The dying Father God, the dismembered Osiris, that must be reconstituted in the Son Horus, or in this case JC.

He runs into the guy who played his “dead” dad, at age 30 (when Jesus started his ministry) This event really sets his mind to start unraveling his pseudo-reality. 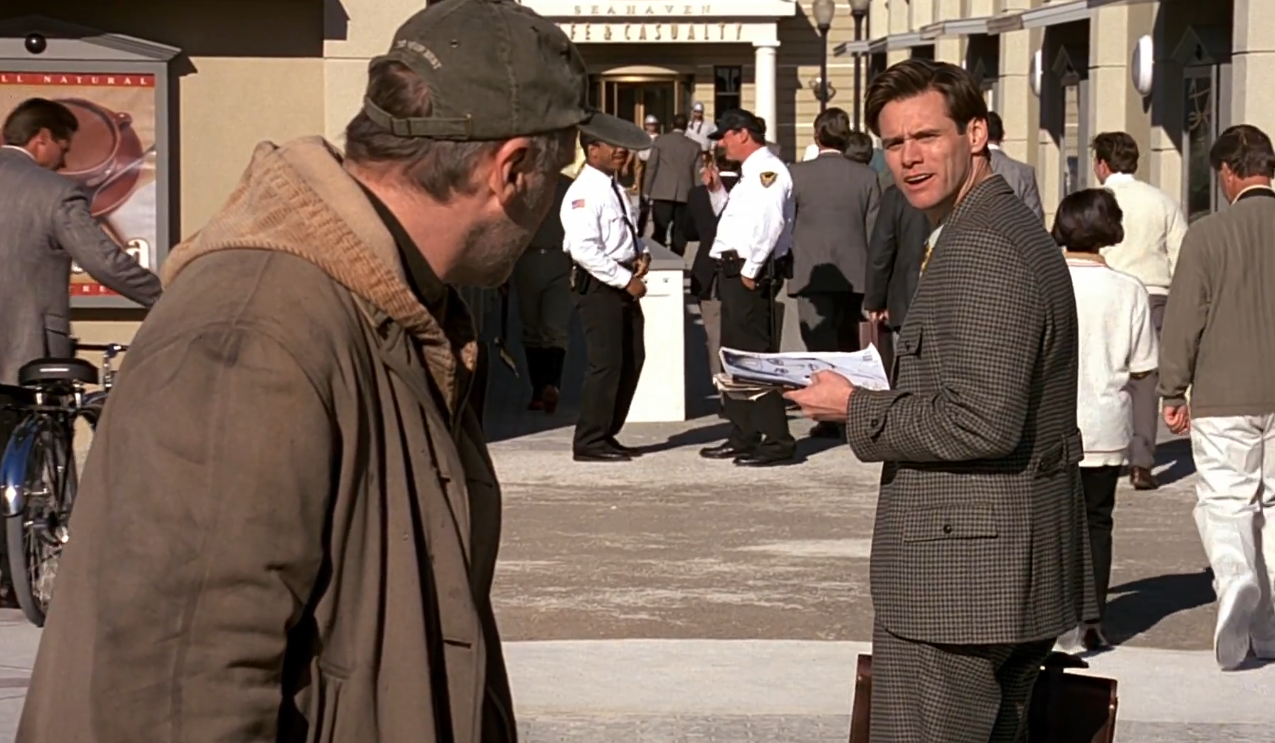 The subject has begun to become self aware (woke). His dead dad wakes him up, like a funeral wake, you awake in the mourning…

You’ve got the father, son and holy ghost.

You know Truman is the son because he keeps getting crucified:

”i’ll cross my fingers for ya,” he tells his wife, followed by the cross beam: ” 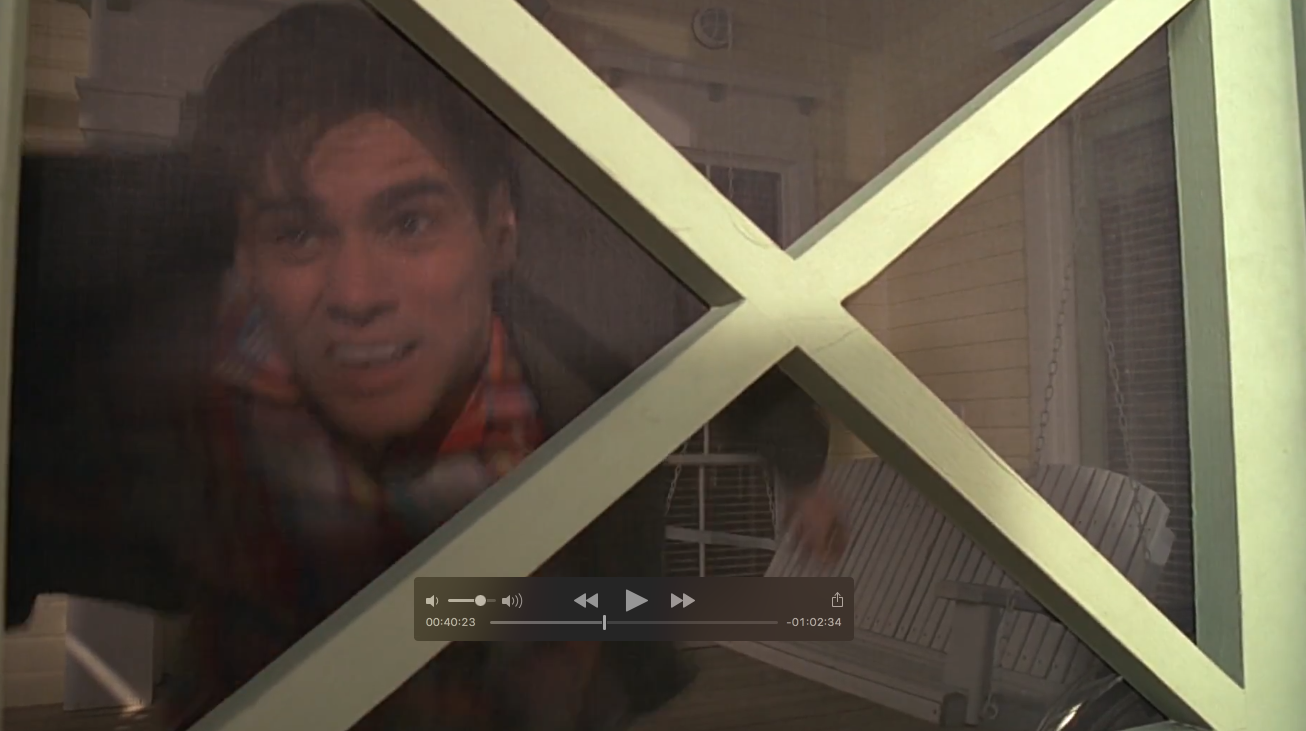 Thus they are “double crossing” us.

Rope ‘cross’ as if being crucified:

It tells then, the story from the First Adam to the Last Adam, from the Lucifer afraid of water not wanting to incarnate, to the man who literally cracks the dome ceiling to escape the Matrix (the Last Adam, the Christ, the resurrection, ascension, etc.).

CRISIS: Truman is missing, he is waking up and must be stopped. All the actors in the town band together to find him.

The way they stand in lockstep, reminds me of reports we kept hearing after these false flag events, of real firemen or cops or rescue men being turned away from the scene. (See Ole Dammegard’s breakdown of the Manchester “bombing” as one example). Because after all, the event must be completely controlled from the media crew, to the shooter and victims and rescue men themselves.

The way they block Truman at every turn from traveling outside the town (waking up), is a nod perhaps to the way the MSM blocks and suppresses authentic truth while bombarding us brute-force style with propaganda and lies on all angles. 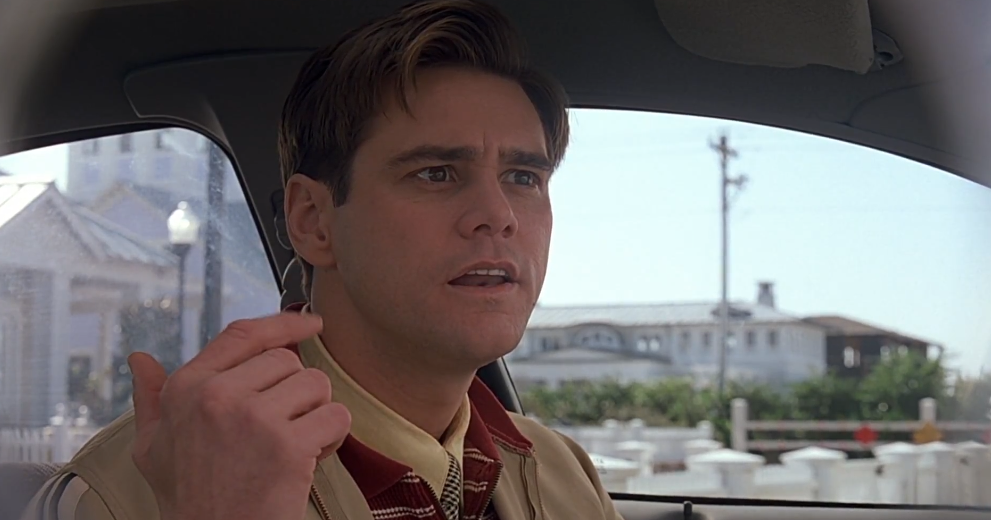 But Truman starts to see it. “Look Meryl,” he says from his car, where he has been sitting parked and watching traffic. “They’re on a loop. They just go round and round.” He proceeds to correctly predict the next three cars that pass. 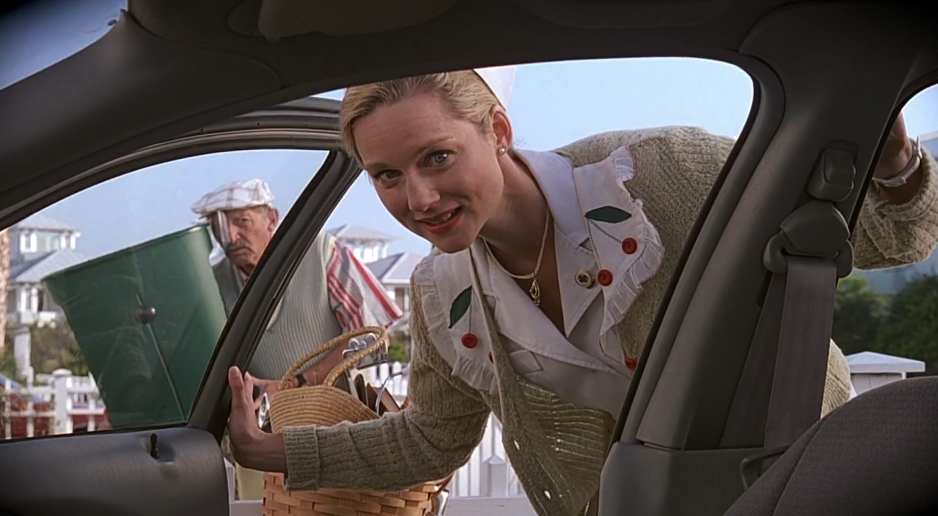 Meryl’s job as double crosser is to gas-light him and make him feel like the schizoid “conspiracy theorist.” Jim Carrey plays this role very well and did so in the gematria film, The Number 23: